Because there's no bench in the field!

Want accuracy? Cradle the rifle’s forestock in sandbags placed on a solid bench, carefully slide a smaller sandbag under the buttstock, and … wait … where would you find a range bench on a hunt? Benched firing is great for zeroing and load development but hardly practical in the field where accuracy matters most. What’s a marksman to do? Just stand and deliver like a proper minuteman? Firing from standing is an option, but few of us can be steady enough without a great deal of practice. Fortunately, we have supported positions that use the body itself for steadiness. 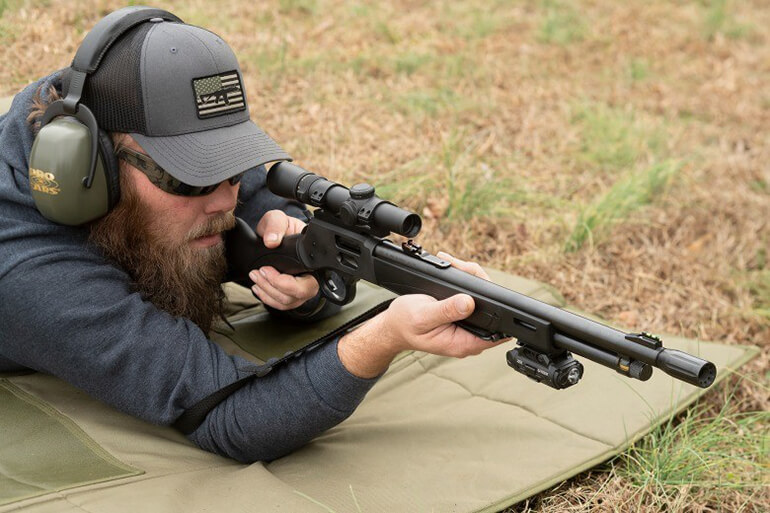 The best known supported positions are prone and kneeling. For hunting, “Marine” prone with the strong-side knee brought slightly closer to the body elevates the rib cage for easier breathing while aiming. Sitting, either open leg or cross-legged (which seems more comfortable for me), supports both elbows, keeping the rifle extremely steady. Kneeling, sitting, and prone positions are quite steady but have the same disadvantage: they put either just the knee or the entire body on the ground, getting cold, wet, or muddy, and risking abrasion from sharp rocks or thorns. All of these positions take some time to assume. Shooting mats help, assuming you have one on hand. 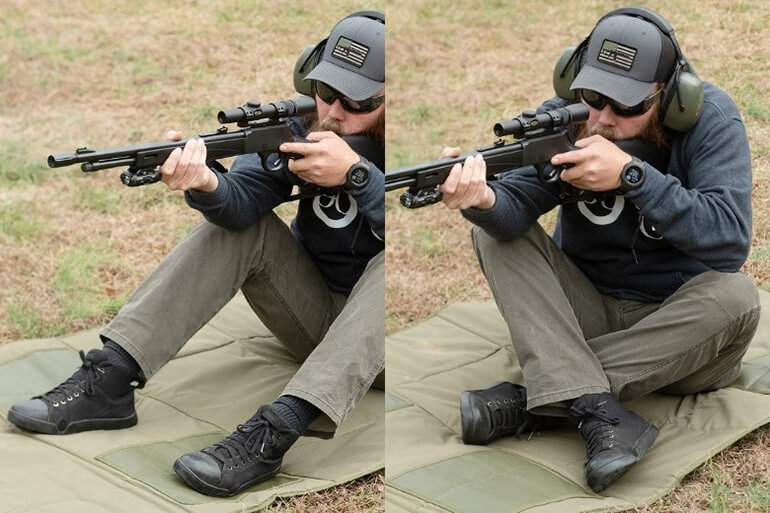 If your knees permit it, firing from a squat can be as steady. With both feet flat on the ground, this position also gives two extra points of elbow support while keeping only the boots’ soles on the ground. Moving out of this position is a matter of just standing up straight. The forward lean of the squat also helps with recoil absorption.

Low and steady poses like these reduce the shooter’s visibility, but they also cut down the ability to observe game over ground vegetation. Even if the eye can see through grass, the bullet is likely to get destabilized by impacting even a slight barrier. As a result, getting low is often not in the cards. Fortunately, trees, walls, and other vertical objects can be used for support. Depending on the size of the support and the rifle’s weight, you may use. If the tree presents a fork, place your hand in the opening and rest the forend on the palm. Direct contact of the forend with the hard tree trunk would likely cause a vertical deflection. A backpack or another soft support placed on a large rock or a wide stump provides support for the forend: sit behind it with both elbows supported on knees, or go prone with the support hand under the toe of the buttstock. That way, the support hand rests on our shoulder while the stock cradles in the V between the thumb and the fingers. Do not rest the barrel or the magazine tube on the bag.

Any standing position and any supported pose in which the weak hand is on the forend benefits from using a “hasty” sling. Put your support arm through the sling past the elbow, then move the hand outward to gather the excess material and tighten the sling. This serves two purposes, transferring some of the rifle weight to your support side shoulder to reduce shake and anchoring the muzzle somewhat on recoil, reducing the muzzle rise.

Both the Henry U.S. Survival AR-7 and The New Original Henry lack conventional forends. You may still support these rifles with an open palm under the barrel (AR-7) or the magazine (New Original Henry). Another method is to cradle the rifle receiver with the support hand holding onto the strong-side forearm. Neither rifle has much recoil or muzzle rise, so this approach permits a steady aim in the absence of solid support. In the absence of strong wind, both can be supported around the receiver well, especially if the support arm rests on something steady. Give some of these positions a try next time you’re out with your Henry!

Get the latest updates on new products and sales